Jo Keeling is the editor and founder of the award-winning Ernest Journal, an independent magazine for the curious and adventurous, and co-author of The Odditorium: The tricksters, eccentrics, deviants and inventors whose obsessions changed the world. She is also a freelance writer, editor and festival curator with a penchant for slow travel, long rambles and sea swimming. 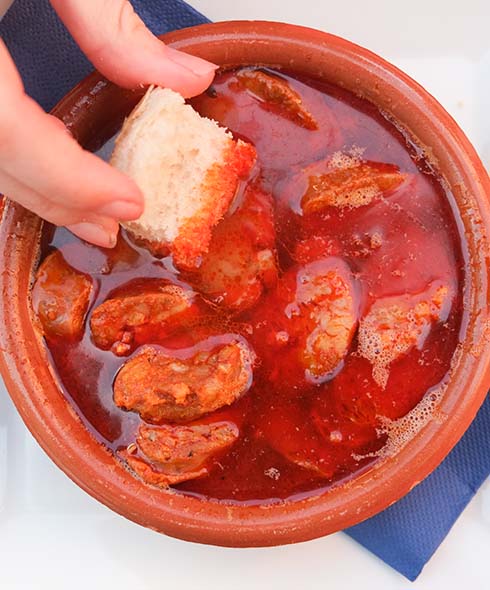 Santander seems to be made for warm, easy days: a sea breeze filters down its narrow streets, and tall buildings shade strollers. After a bleak British winter, my friend and I seek out a table in the sun and bask for a while, soaking warm bread in chorizo a la sidra and folding slices of Jamón ibérico into our mouths. We then let our senses guide us through the streets, dipping into vignettes of city life. Hearing a murmur of voices and clinking glasses, we wander into an indoor market where people are chatting over white wine and pinchos (tiny tapas held together with skewers – the word ‘pincho’ means ‘to pierce’). It’s a wonderfully sociable custom, originating in the Basque Country, and an ideal snackette to soak up a boozy lunch with friends. 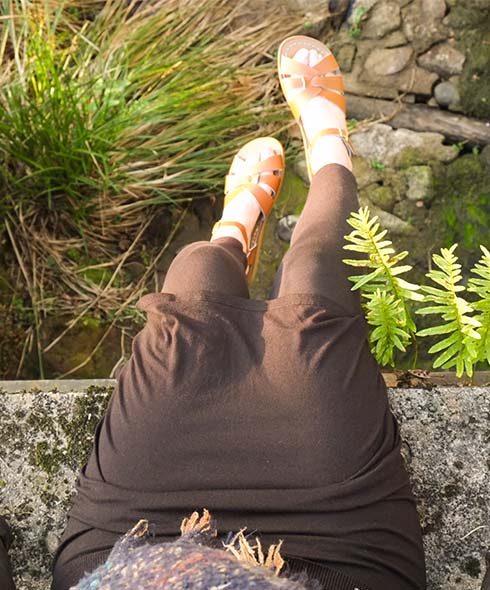 Winding up at the central station, we embark on the first leg of our slow adventure on the FEVE railway – a network of narrow gauge lines that weave from Bilbao to Ferrol along the northern Spanish coast. We share our carriage with commuters, reading or snoozing against the windows, and soon the city fringes are replaced by pasture land dotted with cows, low hills topped with white stone churches, and willow beds that blur beside a shallow river. The carriage slowly empties, and the stations begin to get smaller.

Jumping off at Cabezón de la Sal, we wander along back lanes to our hotel. Once a cowshed in a farm estate, El Jardín de Carrejo still has relics of its former life: an abandoned canal in the back garden complete with locks, sluice gates and moss covered bridges. Tiny purple flowers push through the cracked concrete paths and lizards scuttle over wet stone, seeking out bright blue beetles. As we dangle our legs over one of the empty pools, the only sound is bickering blackbirds and the distant chime of cow bells.

The only sound is bickering blackbirds and the distant chime of cow bells. 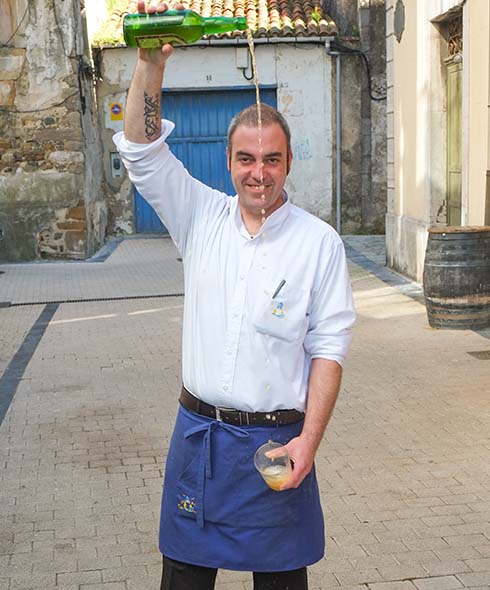 It’s midday in the seaside town of Ribadesella and the barman is arranging cider barrel tables outside his sidrería, chatting with passers-by. An expert escanciador (cider pourer), he comes over to decant the local tipple – a custom that has become a performance art. Raising the bottle high in his right hand, he puffs out his chest and pours an inch of dry, cloudy cider into the tilted glass held low in his left – all the while looking straight ahead. We’re told to down it, then to chuck the dregs onto the pavement. “Pouring the cider from a height introduces oxygen,” our host Elena tells us, “it gives it crispness.”

As we work our way through the bottle, Elena circles hidden beaches, blow holes and the word ‘surprise!’ on a map and draws us pictures of the fish we must ask for at lunch. “A meteor struck in Mexico and moved the ground up in Asturias, like this…” she says, scrunching up the map to show the continental uplift that caused the Picos de Europa – a 2,000 metre plus mountain range comprised almost entirely of oceanic limestone. “There are dinosaur footprints just down the coast,” she says, “and fossils on the picos.” 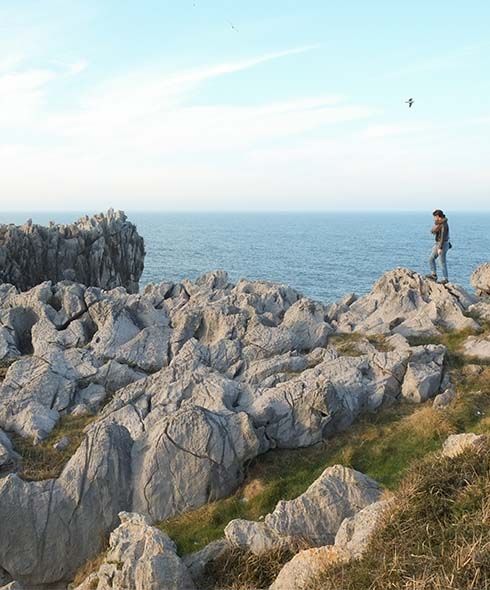 On Elena’s recommendation, we head to Casa Basilio – an unpretentious promenade cafe where white-haired men are working their way through newspapers, new parents share a pile of mussels while passing round a grouchy baby, and the affable waiters tell jokes while patting customers on the back. Everybody is unashamedly daytime drinking. There’s little English spoken in Asturias, so we crack the waiter up by showing him Elena’s doodles and end up with a frisbee-size, freshly caught rodaballo (turbot) cooked simply with potatoes.

To walk off lunch, we pick up a path around the headland, for views over the sweeping S of the River Sella as it flows out to sea. The Picos de Europa paint a crisp line behind the sea fog that has enveloped the town. The mountain range, only 12 miles from the Atlantic, was named by returning Spanish mariners after they caught sight of the peaks on their way back from the Americas. They also left their mark by building an avenue of ornate Indiano mansions. Later, as the sun sets, we step over the clints and grykes of the Acantilados de Castro Arenas – an area of limestone pavement, dotted with blow holes.

Affable waiters tell jokes while patting customers on the back; everybody is unashamedly daytime drinking. 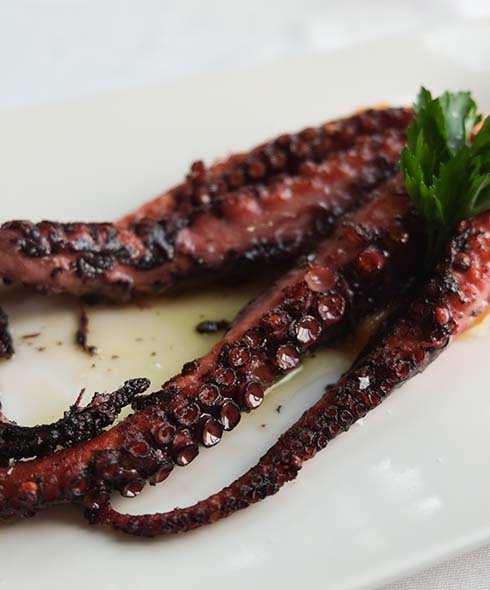 After a restful night in Elena’s bohemian home, Bajo los Tilos, we hop back on the FEVE. The train leads us on a wilder journey through rough hewn tunnels, and green fields dotted with orchards and hórreos – granaries resting on stone pillars. Canoeists navigate riffles of the river below, and locals quaff cider and chat on the tiny platforms. An hour later, we’re overlooking the river at El Pando restaurant, in the small town of Infiesto. Our serene host Laura recommends a few ‘raciones’ (sharable portions), and serves us deep purple octopus, lightly charred, and a goat’s cheese salad with black pudding, walnuts and quince.

I didn’t have time to be interested in cooking back in Brighton. Asturias gives you that space to be slow. 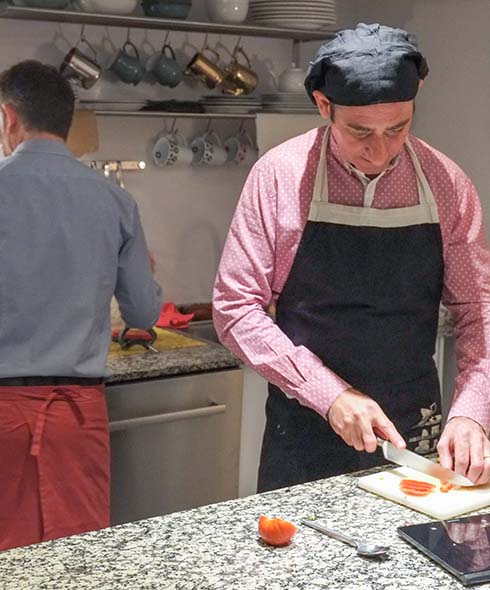 Rather more full than we’d planned, we head to El Gran Sueño, in the foothills above the town, to meet our warm and amiable hosts Dave and Javier. Their five-bed guest house is meticulously well thought-out and the decor blends charming salvaged furniture and Park Güell inspired tiles with neat kitchenalia and a modern grey floor. The couple swapped south east England for this remote part of Asturias five years ago, and they’re readjusting well. “How long did it take us to get used to living in the countryside? An hour?” says Dave, as he takes his second batch of sourdough out of the oven. “I didn’t have time to be interested in cooking back in Brighton. Asturias gives you that space to be slow.”

At dinner that evening, Dave pads over in his smart felt slippers, a soft chef’s hat tucked behind his ears, and serves up soup – “Made from Jerusalem artichokes and er, erm… bloody hell, I’ve forgotten the English for it.. leeks!” – followed by crayfish tapenade, a traditional monkfish main course and three cheeses made in the local village. Javier tops up our glasses with Galician wine. “The gastronomy is famed here, throughout Spain,” he says. “The way people live in this part of Asturias hasn’t changed for hundreds of years.” 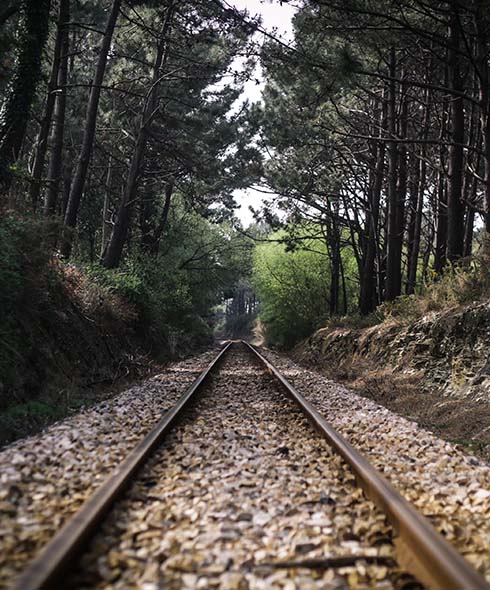 After Oviedo – where we stop for a bowl of Fabada (a stew made with fava beans and spicy Asturian sausage) and to pick up cheese in one of the many delicatessens – the train passes under leggy road bridges, cuts across deep valleys and pulls into tiny platforms in the middle of nowhere. Spindly eucalyptus trees tickle the windows.

Manolo – a former biologist, now hotelier at the elegant La Torre de Villademoros – used to ride the FEVE as a child, travelling solo to visit his gran. “The conductor used to look out for me,” he says, as we wait for the train the following day. A cat stares down at us from the grand station building, above a disintegrating tile map. “We used to have a station master,” he says. “He still lives here, but now he works in town.”

The FEVE clearly resists the acceleration of modern life. The road to Oviedo used to take three hours; now you can drive there in 50 minutes. The train, on the other hand, continues to pootle along at 60 mph, and doesn’t always turn up on time, but still remains an integral part of rural life. “On a city train, commuters will sit as far away as they can from other people,” says Manolo. “On the FEVE, if there’s one person in a carriage, you’ll sit right next to them. It’s a chance to meet other local people and to reach the culture of nearby towns. It helps us realise we are not completely apart from the world.”

The FEVE clearly resists the acceleration of modern life. 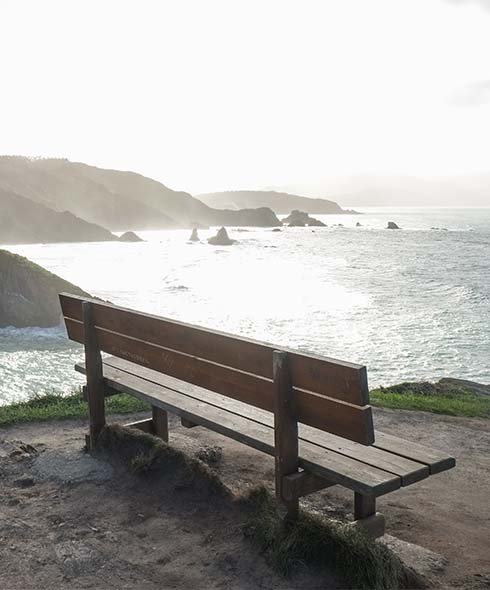 Our slow adventure winds up in the region of Galicia, where we can’t resist disembarking at one of the tiny platforms. From Loiba, it’s a 2 km walk through eucalyptus woods to the dramatic Praia do Picón, where we rest on ‘the most beautiful bench in the world’ and watch waves crash into the tilted granite coastline. Even in March, there’s a steady queue of people waiting to take a bench selfie.

“It’s famous because it was mentioned in the 2015 Earth and Sky photo contest” Mónica and Alex, our hosts at El Castaño Dormilón, tell us later over tapas at Rio Sor. We tuck into pulpo a la feria (boiled octopus, which literally translates as ‘octopus at the party’) and baby squid cooked on a hot griddle, as they tell us about the area with its tidal fjord-like river, migrating birds and the highest sea cliffs in continental Europe.

Moving here was a lifestyle choice for the couple, who’ve lived in London, Barcelona and Serbia.

Galicia lets us live slowly. When we first arrived, we used to run past our neighbours because they wanted to chat,” Alex says, laughing. “Now I love spending 20 minutes talking about how clear the river is that day.