Travel writer Tim Moore has walked 500 miles across Spain with only a donkey for company, sort-of conquered the Tour de France on a diet of ProPlus and rosé wine, and ridden the 3,200km route of the notorious 1914 Giro d’Italia, handicapped by a century-old, wooden-wheeled bicycle and an unbelievably daft period outfit. For his most recent book, he undertook a cycling odyssey more ambitious – and more silly – than both of those combined, riding 8,500km from the Arctic to the Black Sea on an East German shopping bike. Somehow, he still lives in London. 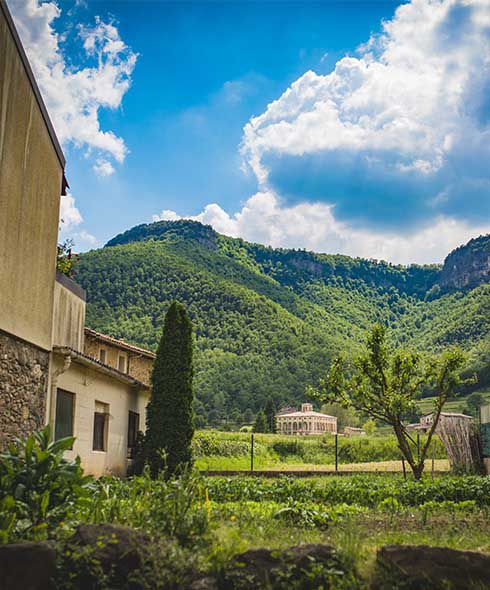 Despite Girona’s boisterous best efforts, the downtown evening bustle barely penetrates the mighty, ancient walls of Casa Audouard. As Sonia and her father Torras walk me through their ancestral mansion’s dim and echoing halls, it seems a long time – perhaps half a millennium – since I inched my hire car through the old-town alleys and despatched a plate of rare beef and faves vinegreta at a lively bistrot round the corner.

A cast of eclectic predecessors stares down at us from gilded frames: the bankers, paper barons and dentists who transformed this medieval palau into a fantastical, here-be-dragons Modernist castle, all stained glass and chivalric murals. Cheerily domestic touches disarm the imposing vibe. Sonia apologises for the party balloons marooned up in the vaulted rafters during her recent birthday celebrations. The family’s excitable young terrier darts between our feet.

The cellar is shared between an elaborate Gothic chapel and Torras’s well-used workshop. With a stoop and a squint I enter my yellow-tiled sleeping quarters, a compact, vibrant contrast with the sombre majesty outside its door. Magnificent all the same: I sleep regally beneath a baroque headboard that almost grazes the ceiling.

Breakfast is an Old Master still life, laid out in the shadowy rear parlour. Sonia thoughtfully assembles the Catalonian staple that will begin each of the coming days – pa amb tomàquet, crusty toast smeared with bisected tomato, olive oil and sea salt. ‘Sorry for your new friends,’ she says with a smile, adding a cheeky dab of fresh garlic.

Then I’m driving north-west into La Garroxta, between the low, green, poppy-speckled domes of the extinct volcanoes that symbolise the region, and up to the sleepy cluster of dark wood and pantiles that is Els Hostalets d’En Bas. 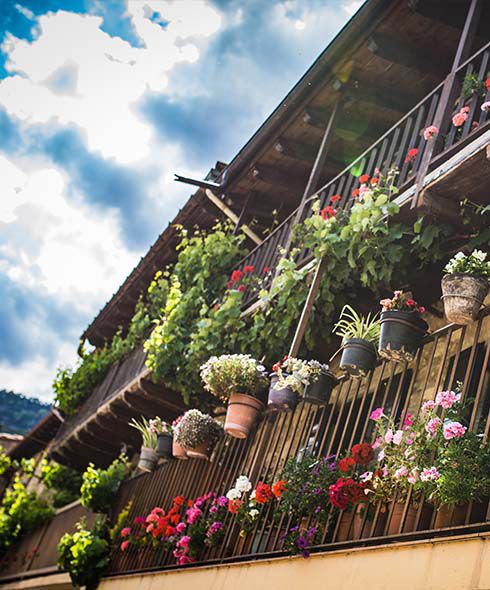 An old lady tends the geraniums on her balcony, chatting to a neighbour paused on the terracotta paving below. Behind them, the town’s trim little church spire jabs into the blue heavens; looming above and all around towers a flank of rock-topped rolling green. Gazing down from its hazy, distant brow – impressively, and just a little horribly – stands the venerable, craggy chapel of Sant Miquel de Castellò, target of an expected stroll that’s just been upgraded to a perpendicular hike.


Reward for a sometimes unsightly scrabble through the dappled steepness is a mighty panorama: bright green smallholdings sprawled across the floodplain far beneath, girdled with cork-like walls of rock and the distant, snow-veined Pyrenees. The more benign return loop takes me through tilted pastures of yellow broom and buttercups, my path lined with almost preposterously fragrant flowering thyme. A symphony of crickets and lizard scuttle accompanies me back down to earth; in three hours, the only fellow mammals I encounter have bells round their necks. Back down by the car, gazing flintily up at my conquest, I realise I’ve somehow completely bypassed the chapel.

In Olot, I refuel amongst dapper old couples at a market-square café: patates d’Olot, toothsome meat-filled potato fritters, and a hefty shank of botifarra sausage. ‘We don’t even have pigs in this region, but still we are the kings of pork!’ says local guide Anna when I meet her outside one of the town’s many butchers, its window festooned with sausage strings and cured hams. 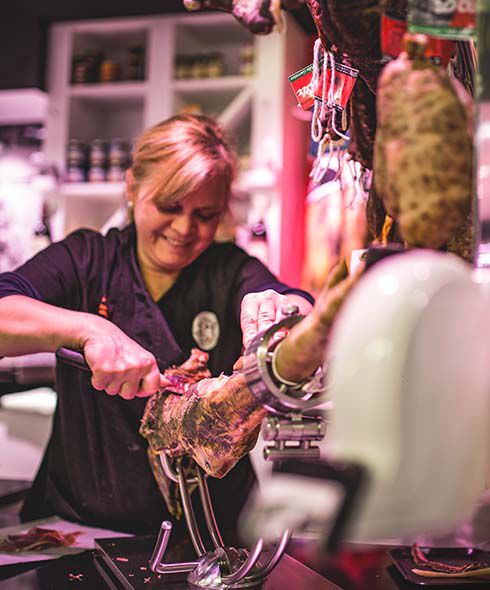 But Olot made its first fortune in the weirder world of religious statuary, as memorably celebrated in the Saints Museum. Walking alone with Anna through a zombie army of life-sized plaster martyrs and virgins it’s difficult to maintain an appropriate expression, particularly as many carry their more fragile accessories – hands, lambs, babies’ heads – in little string bags round their necks. In the basement, craftsmen maintain the tradition behind a viewing window: Anna nudges me as an aproned artisan slices the top off Jesus’s skull and forces a pair of handblown glass eyes through the inside of his face.

‘Most locals put about 40 herbs and flowers in their ratafia recipe,’ says Goretti, dispensing dark syrup from an unlabelled moonshine bottle. ‘But I’ve used 63.’ I’m at La Rectoria, a four-square, rustic mance with an en suite church that she and her Scots husband Roy run as a foodie-focused guest house. Goretti’s ratafia – a bracingly medicinal walnut-centric digestif – is the finale to Roy’s supreme efforts in the kitchen, or rather an encore, as it’s already featured in the sauce on his pumpkin gnocchi. La Garroxtais bean country – legumes thrive in the rich, volcanic soil – and Roy magics humble local fesols into a spicy take on an old friend from home: baked beans with bacon and prawns. ‘Mar y muntania,’ he says, proudly showcasing his Catalan. ‘Basically, surf and turf. That’s the defining theme in Catalonian cuisine.’

Most locals put about 40 herbs and flowers in their ratafia recipe,’ says Goretti, dispensing dark syrup from an unlabelled moonshine bottle. ‘But I’ve used 63.’

La Rectoria overlooks a cycle path laid on the bed of the old goods railway that once took pigs into Olot, and plaster saints out of it. I spend a day freewheeling through fern-walled rocky cuttings and over sun-washed bridges, pushing the bike down grassy side paths that lead me to lonely, whitewashed chapels and gentle waterfalls. At Sant Feliu de Pallerols, I savour Goretti’s jamon-heavy packed lunch by the deep, chuckling river that cleaves the town in two. A smiling cartoon moon dangles from the bridge: a tribute to locals of old, who were said to while away evenings trying to fish for the moon’s reflection. ‘The other towns still call the residents pescallunes, moon fishermen,’ Roy tells me that night over slow-braised beef and farro, a regional polenta made from maize grown in the neighbouring Val d’En Bas. ‘It sounds a bit embarrassing, but they’ve embraced the tradition. Every May they drop a load of wooden moons off the bridge, and the kids compete to fish them out.’

The other towns still call the residents pescallunes, moon fishermen,’ Roy tells me that night over slow-braised beef and farro 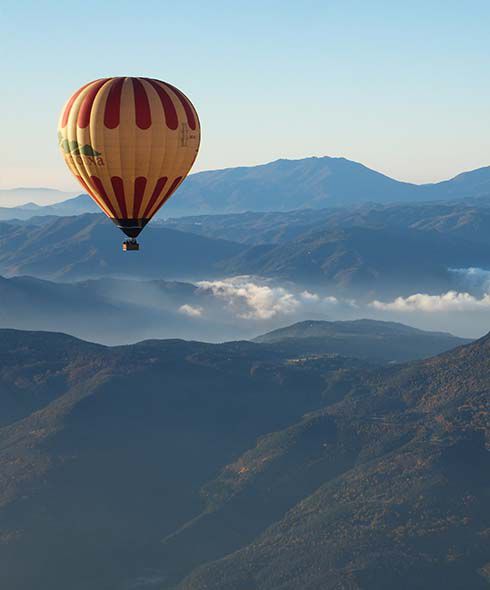 As the dawn mist clears I’m gripping the edge of a wicker basket, and watching a big green field shrink rapidly beneath me. A balloon ride is the only way to appreciate La Garroxta’s volcanic landscape, and our pilot Toni is soon pointing out the neatly cratered cones that nose up between the bean fields below. The occasional dragon’s roar of the gas burner above us punctuates a gigantic, eerie silence as our jaunty round shadow passes over cow pastures and the terracotta patchwork of village roofs. It’s a mesmeric experience, particularly after Toni sends a cava cork flying into eternity and the uncharted effects of pre-breakfast alcohol kick in. Then we’re brushing the treetops and, through some miraculous feat of advanced balloonsmanship, touching neatly down on a country lane, right next to our waiting support vehicle.

‘The safest place to live here is on top of a volcano,’ says Beth as we stand beneath the ashen cleft cut by a defunct quarry deep into one of La Garroxta’s 40 magma hillocks. ‘The last eruption was 11,000 years ago, but when the next one happens the lava will find a new place to come out.’ From the rich, red soil to the dark stone that every village is built from, La Garroxta’s volcanic bequest keeps on giving. As a walking guide, Beth’s favourite legacy are the beech woods we now amble into. Laid out on an undulating bed of lava-flow ‘blisters’, la Fageda d’en Jordà is a becalmed realm of towering, spindly trunks, sunlight filtering through the delicate, geometric foliage around us like an oriental watercolour landscape. ‘It’s a special place for all Catalans,’ breathes Beth, reverentially unfolding her copy of an ode composed in honour of the forest by Joan Maragall, a modernist poet who did much to conserve the region’s language. Beth tactfully suggests that for visitors, a little Catalan – and even less Spanish – goes a long way: ‘Just a “bon dia” here and there will make you very popular.’

It’s a mesmeric experience, particularly after Toni sends a cava cork flying into eternity and the uncharted effects of pre-breakfast alcohol kick in. 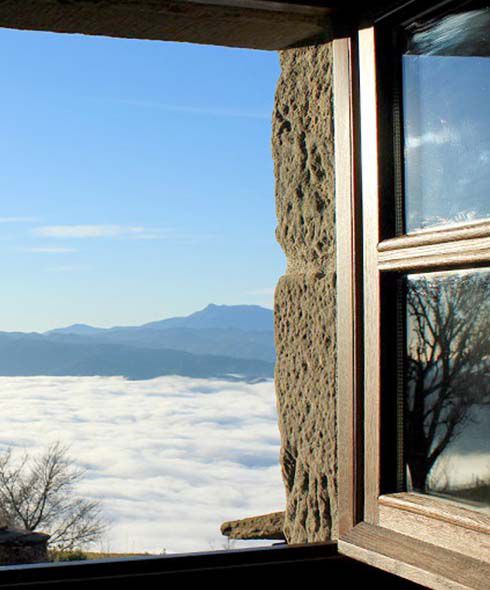 Heading to La Garrotxa’s south-west extremity, the road twitches ever upwards through the oaks and beeches, tarmac slowly ceding to gravelled concrete. Then the trees part, and a wild and windswept new world opens dramatically before me. Hardy cattle graze amongst house-sized, age-smoothed Flintstone boulders, at the rim of an epic, plunging canyon circled by vultures. I pull over and walk gingerly to the edge: down at the distant fundament, between walls of rock and threads of mist, squirms the River Ter, a gleaming blue necklace. Beyond the chasm’s distant opposite flank, ranks of rugged greenery retreat to a hazy horizon. This is the Collsacabra, the ‘mountain pass of the goats’, and I have it all to myself.

Or very nearly: a few hours later I’m walking with Belinda Parris and her three dogs towards sunset and the village of Tavertet, a gilded clutch of old roofs perched bravely atop the void. In a while I’ll be under one of those roofs, putting away salted cod, wild mushrooms and slightly too much Perelada 5 Finques. But for now, we turn back to gaze at L’Avenc, a fortified medieval mansion that Belinda’s brother Matthew, the Times diarist and former MP, had chanced upon as a derelict hulk during a hike 30 years before. Restored some way beyond its original glory, there it stands on a sheer bluff, that great arched threshold majestic in the last rays: Catalonia’s most magnificent self-catering guesthouse. ‘We had a mantra that kept us going,’ says Belinda, in wistful reference to the endless trials of renovation. ‘”The G&T time will come one day.”’ Her dogs bound away down the bald slab of natural granite that serves as Tavertet’s main square. ‘Well, I suppose it has now.’

Hardy cattle graze amongst house-sized, age-smoothed Flintstone boulders, at the rim of an epic, plunging canyon circled by vultures