By Chris Elmes
Just like the rumbling slopes of its iconic Mount Etna, Sicily has a lot going on under the surface. Break through the standard tourist trail to the rich volcanic countryside and you’ll find a fascinating place where ancient villages cling to sheer hillsides, fiery people give you a warm welcome and melting ricotta bursts through the crust of crisp fresh Cannoli. 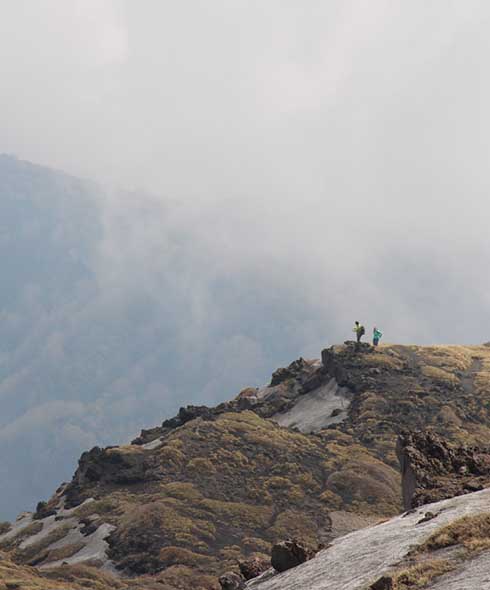 A climb through the soft ash to the smouldering peak of Etna rewards you with layered views that rise from shining seas to green meadows and bare rock, but beneath one small part of the warm, dark ground lies a strange place of permanent cold. A testing 20km, 8 – 12 hour round trip past extinct lava flows and through pine woods on a dwindling track from the town of Linguaglossa brings you to Etna’s hidden ice cave, where trapped air has kept the temperature below zero for millennia. In just a few steps you move from baking in the Mediterranean sun to feeling the crunch of snow underfoot and watching your breath curl between long icicles hanging inside a living volcano.

Sicilian food draws a sumptuous array of flavours from its varied terrain. The high volcanic slopes breathe an earthy tang into the wines, the meadowed foothills fill local kitchens with fragrant wild fennel and zesty tomatoes, while anchovies and sardines are swept up from the sea and used, among other things, as a substitute for songbirds. 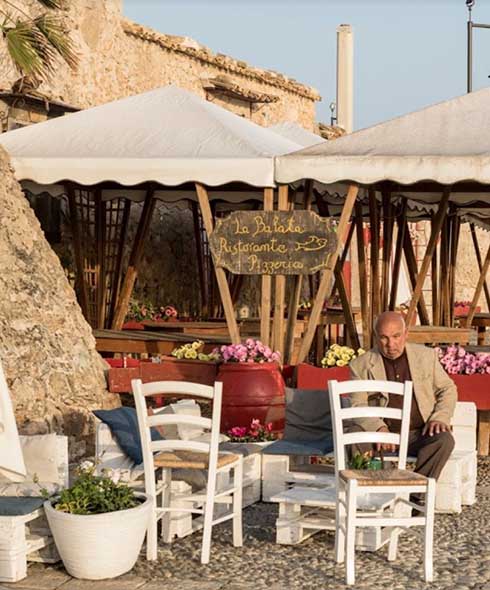 A slice of Sicily – Pachino pizza
It seems a little obvious to suggest trying pizza when you’re in Italy, but this is a regional specialty that just isn’t the same outside Sicily. Along the south east coast are villages like Marzameni, where you can sit in the evening, with waves lapping at the pier and join locals for a glass of wine and an extremely local delicacy – Pachino pizza. The sweetness of the Pachino tomato, named after the small town nearby, gives a fresh tang to the classic mozzarella and basil combination, meaning that every crispy-crusted slice offers a true taste of Sicily.

Sardines for songbirds
The sardine, whipped fresh out of the Mediterranean rather than popped out of a tin, features frequently in Sicilian recipes. They come fried, marinated and in a classic pasta with wild fennel, but they’re also the main ingredient in the traditional peasant dish Sarde a beccafico. The name (the beccafico is a small finch) refers to an old local specialty which involved stuffing small songbirds with a fragrant mix of roasted pine nuts, raisins, anchovies and lemon zest. The use of sardines, once a poor man’s imitation, has now become a staple for the whole region.

Cannoli
You have only seconds to eat a cannoli at its best. The moment the vendor has crammed the ricotta into the hot curl of pastry and garnished it with lemon, chocolate chips or candied fruit, it begins to melt. Crunch straight in and let the creamy cheese and the sweet pastry blend together in your mouth.

Panelle (Fried Chickpea “Polenta”)
Dotted all over Sicily are small kiosks known as friggitore. You’ll be able to follow your nose to them because, as the name suggests, they sell only fried food, with the crushed chickpea ‘panella’ an unmissable specialty. Stacked into a sesame bun with a squeeze of lemon, they make a greasily indulgent snack, but you might also see them as a sizzling side dish.

A lot of bottle
The Passopisciaro winery at Vini Franchetti proves that growing grapes on the slopes of a live volcano means having a courage not required in the traditional idyllic picture of life on the terroir. It was rebuilt in 2000 after an eruption had destroyed many of the area’s vineyards and is now producing fine wines with the region’s characteristic earthy undertones.

Sicilians are as warm as the soil under their feet and you’re sure to find yourself meeting plenty of the locals, but there are also some great secret spots for the times when you need a moment to yourself.

Top Secret
In the hills to the north east of the imposing peak of Etna is the fortified hilltop village of Castiglione di Sicilia. Its ancient streets climb among the crags and crumbling buildings jut from towers of rock. Being far off the tourist trail means that you can find a shady corner in the ancient stillness, rest your back against a cool stone wall and watch the flow of life below you on the distant valley floor.

Get Social
The recent boom in agriturismo in Sicily has helped sustain and revive the local agriculture. Not only can you now experience the gloriously slow pace of rural life in stays at ancient, terracotta-roofed farmhouses, but small town markets like that in Randazzo have become even busier hubs of social activity and gorgeous fresh produce. Every Sunday, the centre comes alive as residents and growers haggle and chat over creamy artichoke, bright green Bronte pistachios and a wealth of other fresh fruit, veg, fish and meat.

When it comes to souvenirs, we think it’s always better to take home knowledge than novelties and nothing will remind you of Sicily like the flavours you find there. At Monaci delle Terre Nere you can learn how to make pasta and gnocchi from the local wheat or stroll the herb garden and create magical meals from whatever you pick, under the tutelage of chef Vincenzo Gulino. A day spent in the terraced garden on the hillside above the sea, working with pungent herbs, sweet pine nuts, salty sardines and sharp lemon, will give you a little taste of Sicily to recreate wherever you go.

60 miles southwest of mainland Sicily, halfway to Tunisia, the peak of a continental rift rises out of the sea to form the island of Pantelleria. It’s a surreal place, where vibrant flowers burst out of cracks in dark rock, grape vines crawl along the ground out of the wind and a wide azure lagoon known as Venus’ Mirror offers you the rare chance to swim in the crater of a volcano.

Away from the coast, the island transforms into a place where you lose all sight of the sea in hidden valleys, watch falcons leap from the trees of thick leche forests and see the modern buildings of the two main towns give way to the dark stone of the traditional square Dammusi, whose simple clay interiors make cool, timeless havens from the heat of the sun.

The island is more popular in the summer months, when the ferry service from Trapani runs more regularly, but is at its most beautiful in spring and autumn. Flights from Trapani and Naples take only 40 minutes and run all year round. While some shops and restaurants might be closed in the off season, the island will be even more peaceful.

SEE ALL OUR PLACES IN SICILY