The pilgrimage of La Peña

Daisy is the daughter of Hermione and Nick, owners of Finca el Moro, in Andalusia. She told us about prepping the horses and the drinks, then setting off into a colourful, musical romería. 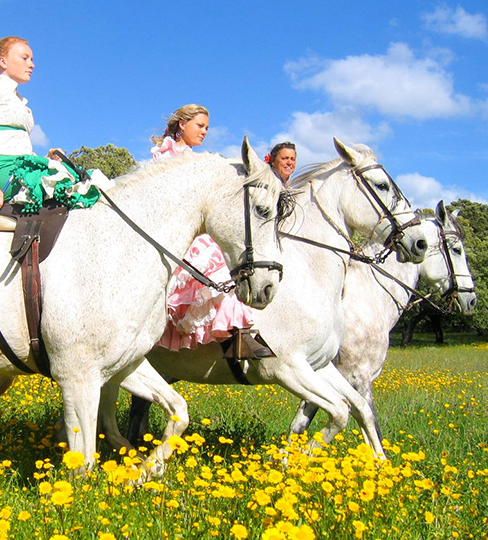 Romerías are processions in which La Virgen from a local village church is taken out and moved to a shrine, usually in the countryside. They are great, colourful days out that happen once a year for each village and are so special that people plan their annual holidays around them. There’s dancing, singing and a few solemn moments as well as picnics around the shrine. There’s also a traditional drink, the Rebujito. Although the name means ‘vicar’s ruin’, it’s not too strong and has a refreshing kick that gets you through long, hot days. I recommend making one now, then joining me for the rest of the romería!

1 part Manzanilla sherry
3 parts 7UP (yes, that’s right, 7UP! Nothing else will do)
Plenty of ice

A handful of mint 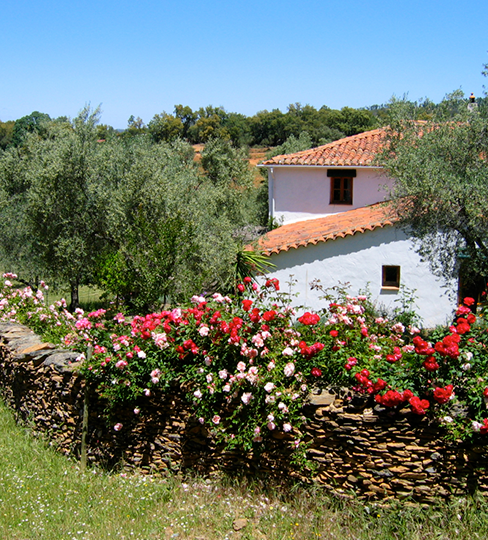 Our romería begins the evening before the big day. All the horses are washed and brushed until they shine in the low late-evening light. We prepare six of them as well as little Romerita, the pure white pony, and tie them all in the yard overnight. Excitement runs through the whole farm – tomorrow will be a different kind of day. We’ll have to be in the village square by eight o’clock the next morning, all of us dressed, mounted and with the picnic ready. There are eight of us, all friends, and a very international party! As well as ourselves, there is Isabel from Germany, Nicole from Holland, Carlos and Marta from Madrid and Teresa from Seville.

The alarm wakes us at six and we go straight onto the coffee, still feeling a little the worse for wear from a late dinner the night before. Some of us go out into the warm, dark morning to begin preparing the horses. First we feed them, much earlier than usual. They eat but fidget and stamp their feet. Gentle snorts betray their nerves. The tack is clean, soft and slightly greasy to the touch. Special and decorative. Tails are plaited and tied up, hooves polished and oiled. Across the yard from the kitchen come the smells of breakfast – bacon frying and more coffee. The picnic is packed away, ready to be stowed in the saddlebags we all carry. Everybody works quietly, not wishing to wake the day.

The girls begin to dress. A cloud of flounces and flamenco dresses, flowers for the hair, grips and clips, buttons and zips… like butterflies, they emerge into the morning. The horses, startled by the shapes and colours as they begin to mount, are eventually calmed by the voices they know, coming from the bright forms they don’t recognise.

Still half dark, the moon shining through the cork trees, we leave, riding quietly, glad to have got away in time, trying to remember if we have everything. As we reach the top of the hill, there in the distance is the village on the hillside opposite, the church illuminated as if it’s still the middle of the night. But already we hear the sounds as they carry across the valley in the early morning. Tractors starting, fireworks exploding and the excited shouts of fellow romeros. We ride single-file in cool, evergreen air, still untouched by the sun, through the abandoned farms of early morning. Nearing the village, the track becomes cobbled, and we wake from our solitary, monochrome reveries as the sun reveals the village. 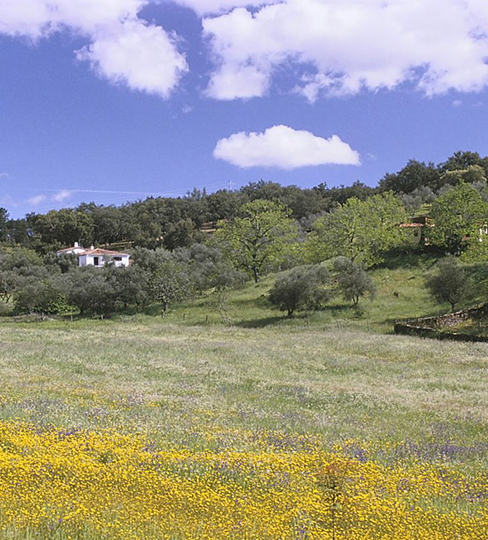 The village is dressed in red and white – its colours. There are shouted greetings, frying churros, cups of coffee and laughter. Mounted horsemen and the ox-cart carrying La Virgen, dressed in white lilies, stand under the lime tree in the middle of the square while mass is said around her. The lawyer, the farrier, the surgeon, the builder – we all stand wearing our medallions of the Hermandad. We mount our horses and stand in a loose half-circle, perhaps fifty of us. The horses fidget and chew their bits and the tractors fire up. More and more people enter the square; it fills with the sounds of greetings, exclamations and urgent last-minute arrangements.

Fireworks herald the entrance of Castaño, our neighbouring village that joins us for the pilgrimage. First their horsemen and men dressed in traje corto, then riders on mules, all of whom are more accustomed to the plough than the procession, and finally ox-carts and the village’s Virgen, dressed with the branches of the sweet chestnut tree. Slowly, in ancient ritual, they circle the square. Men remove their sombreros and tip their heads in recognition as She passes. She is applauded by the sharp clatter of shod hoof on the cobbled square. It’s time to leave.

Again with venerable tradition, horsemen first, then the ox-cart of La Virgen, then mules and donkeys, pilgrims on foot and finally the tractors and trailers decorated with the red and white paper flowers of the village. We wind our way up the hill, past the school and the post office, and from every doorway comes shouts of “¡Vaya romería!” It is only the beginning of a long day of song, feasting and celebration. 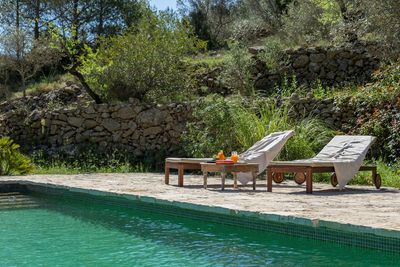 Sawday’s at home: in Spain

Just enough of the rich, salty flavour of Spain to keep you going until you can get back there for real.
Take me there > 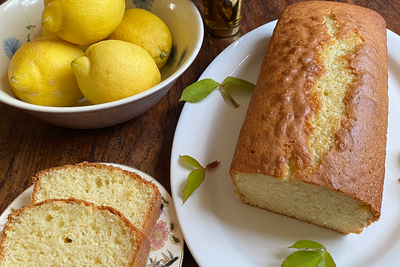 The beautiful citrus flavours will have you dreaming of a sunny afternoon in the Med.
Take me there > 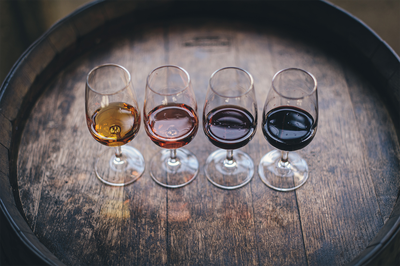 Delicious food pairings for every colour on the sherry spectrum.
Take me there >