By Ella Perryman
Seeing animals in their natural environment is one of the most inspiring and humbling things you can experience as a traveller. Knowing there are no guarantees, that all you can do is put yourself in the right place and hope nature shows up creates a sense of anticipation unlike anything else.

Here are some of our favourite wildlife experiences and places to stay that make the waiting as great as the moment when that blurry speck actually turns out to be the elusive creature you’re looking for. 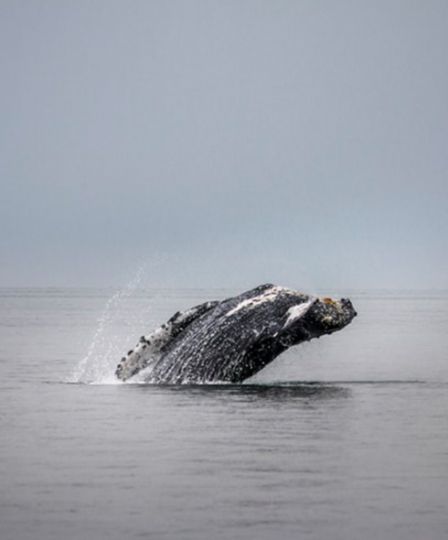 The scattered archipelago of the Azores gives you the chance to see the Blue whale against the backdrop of ragged scraps of lush green volcanic island. The Azores sit out in the Atlantic at the junction of three tectonic plates and the warm, nutrient-rich waters are a permanent home to a huge array of marine life as well a passing point for several transitory species. The Blue whale’s migration routes are still not completely understood by researchers, but they are most frequently spotted passing the Azores in April and May. At any time of year, snorkelling, diving or boat trips are all likely to reward you with spectacular, memorable wildlife encounters with resident species such as sperm whales and several varieties of dolphin. In Spring, you have a chance of a meeting with the largest creature that’s ever lived.

Best time to go –
April, May

How to do it
Base yourself at Quinta do Espirito on Ilha Terceira and have museum curator Francisco and wife Lucilla be your island guides. Numerous companies run snorkelling, diving or spotting trips from the town of Angra do Heroismo. 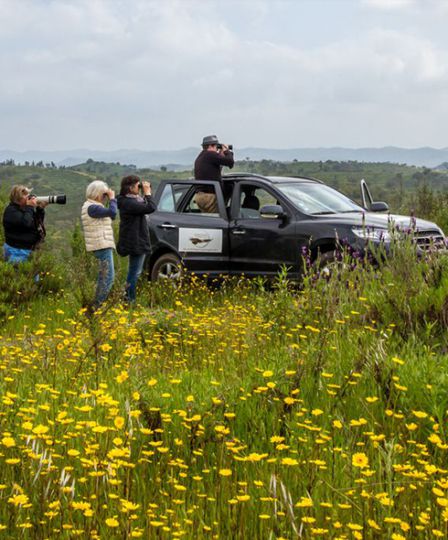 Alentejo refers to a huge tract of Portugal, stretching from above Portalegre in the north almost to Faro in the south. It’s a sparsely populated area, largely free from modern farming and pesticide usage, making it a pristine habitat for the wealth of resident bird species and a perfect stop on the way south for many more. In Spring, great swirls of colourful wildflowers carpet the hills, the wetlands attract vast flocks of migratory birds and the whole region sings with life. During March, April and May, standout native species such as the Great Bustard, Stone Curlew, Montagu’s Harrier and Bonelli’s Eagle are joined by herons, egrets and numerous other species returning from warmer climes. If you can’t make it for spring, the Autumn raptor migration, when thousands of birds of prey head south, is also a stunning sight to see.

How to do it
Quinta do Barranco de Estrada right in the centre of Alentejo near Padrona, can take you out on birding tours and help with naming the various species as well as putting you up in his lakeside B&B. 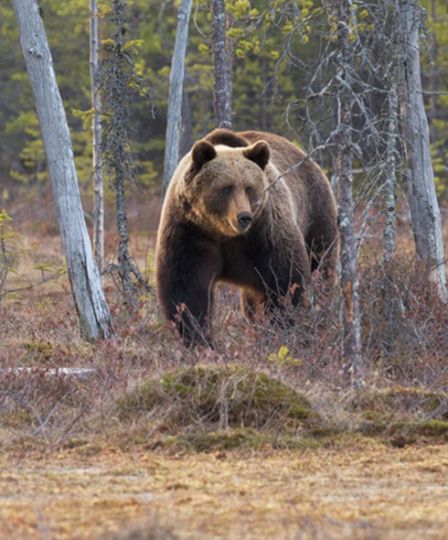 Brown bears in the Asturias, Spain

The Someido Natural Park in northern Spain is carved by five river valleys that lace the views of grey peaks and green slopes with ribbons and pools of blue. Thanks to a concerted effort by conservationists, the Cantabrian Brown Bear, almost extinct in the 80s, is now flourishing again, with a population of around 250. Patience, quiet and a good guide are the keys to spotting these powerful yet shy creatures as they forage and fish in the park’s extensive wilderness.

How to do it
The park is fairly remote, so we would advise staying at Casa da Cabaza and hiring a car. The journey involves a two and a half hour drive through the beautiful scenery of Camino de Santiago. You’ll also need a guide as the park is divided into zones, some of which are not open to tourists. 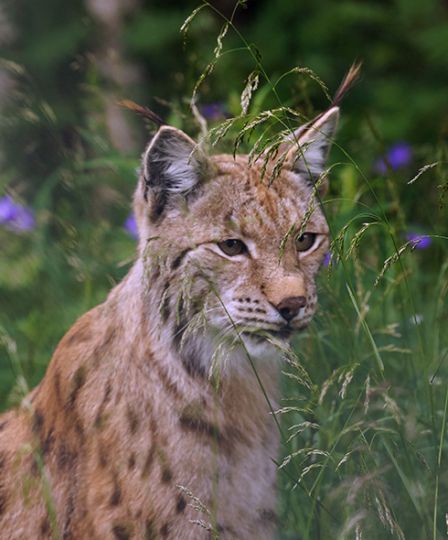 The return of the Lynx to Andalucia, Spain

Among the towering limestone pillars and boulder-strewn plains of Andalucia lives a tiny but growing population of the Iberian Lynx. Intense conservation has brought the lynx, with its distinctive tufted ears and mottled fur, back from the brink of extinction. The Sierra de Andujar Natural Park, which can be visited from Cordoba or Seville, contains the animal’s two favourite habitats, cork oak wood and the flat grasslands. They are most easily spotted in mating season, between December and January, but a visit from March to May gives you a chance of seeing the fluffy cubs pouncing on each other, as playful training for hunting rabbits.

Best time to go – All year round

How to do it
The visitor centre, Las Viñas de Peñallana, is just south of the park and north of the town of Andujar, easily approached along the A4 from Seville (2 hrs) or Cordoba (1hr). Its opening hours vary with the season but are generally only in the morning. You can get maps and tips there. 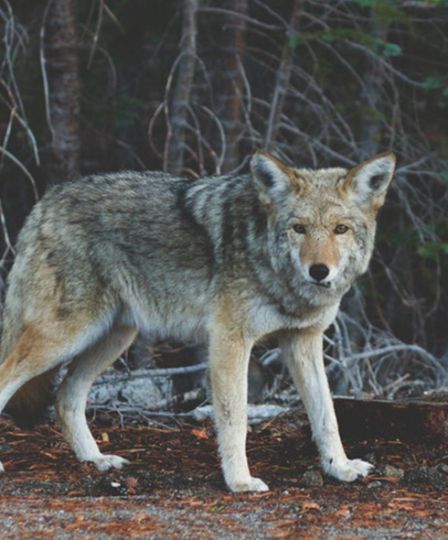 The wolf pack of Segovia, Spain

Wolves once again hunt among the tall pines and in the gentle scrub-covered hills of the Guadarrama National Park, just 50 miles north of Madrid. The Iberian wolf has seen a remarkable turnaround, from being targeted as vermin in the 60s to protected status in the 90s and the establishment of a governmental fund to compensate farmers who lose livestock. The population, once completely wiped out in the area, has returned from the Sierra Norte mountain range and is now flourishing. A glimpse of their reddish fur or the flash of an eye in the dusk is an experience at once thrilling and, on some primal level, slightly unnerving.

Best time to go – All year round

How to do it
You can walk straight into the park from Finca Fuente Techada, which is only an hour from Madrid, so the total journey could be no more than a morning door-to-wolf. 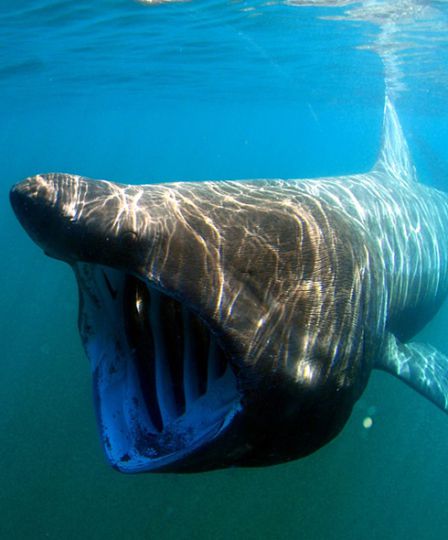 Swimming with sharks in Cornwall, England

The classic picture of a day at the beach in Cornwall is usually more about ice cream cones and sandcastles than ocean giants, but from May to July, basking sharks pass the tip of Britain on their way north. Measuring up to 12m and weighing as much as 7 tonnes, the docile creatures are the second-largest fish in the sea. Boat trips are great for getting a look at them and you might even spot them from the cliffs, but the only way to really grasp their scope is to get in the water with them. Snorkelling tours will drop you ahead of the sharks, giving them the choice of approaching or avoiding you. If you stay still, you might be rewarded with the intimidating sight of the huge ribbed mouth drifting towards you out of the hazy blue water, then gliding by, in search of smaller fry.

How to do it
Dive shops throughout Cornwall offer the experience, mostly from Newquay or Padstow. Make base at The Old Custom House or Pentonwarra. 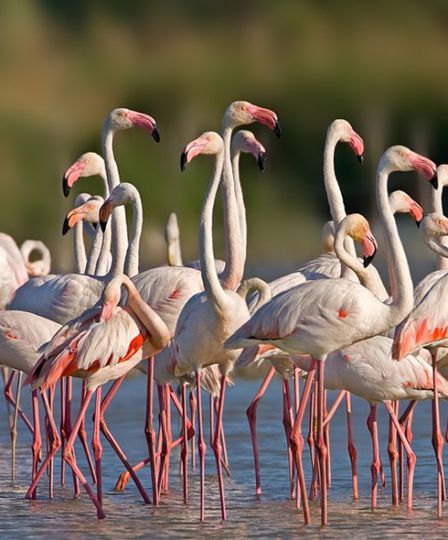 Flocks of flamingos in Camargue, France

The Camargue National Park, just west of Marseille, is a broad wetland of criss-crossing streams and pools, all shrouded in long grass. Part of a dedicated breeding programme begun in the 70s, ironically on old hunting grounds, it’s the only nesting site in France for flamingos. The success of the scheme has resulted in around 40,000 of the birds calling the area home, adding a dash of pink among the wild white horses and black bulls for which the area is also famous. The flamingo breeding season is from April to June, but the couples and their chicks stay in the Camargue until around September before heading south for winter. Most of the park is off limits to humans, but you can still visit Parc Ornithologique Pont de Gau and either arrange a guided tour or wander the boardwalks yourself, threading between the marshes, surrounded on all sides by the bright pink plumage of thousands of birds.

How to do it
From Julia’s home in ancient, artsy Arles, head to the park’s visitor centre at the coastal end of Camargue, near Saintes-Marie de la Mer. Tickets are day passes and the boardwalked trails are yours to roam. Picnics are permitted, but pets are not.