Seafood and solitude on a Scottish road trip

Scotland's wilder areas reward the patient traveller, making them perfect road trip material. This is the rough route that one of our team took on an 8-night journey from Bristol to Scotland's west coast. It was a week of spectacular white beaches, twisting mountain roads, cosy pub firesides and heaps of superb seafood.

Up to Loch Lomond 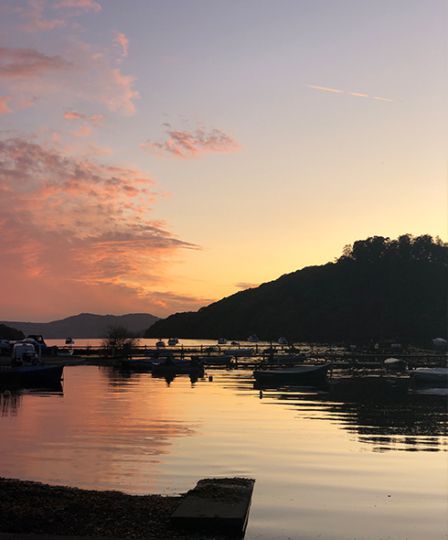 The drive up to Loch Lomond from the south is around six and a half hours long, but the trick is not to try and rush it. Just acknowledge that it’s going to take most of a day and make stops at places like the locally-run Tebay services, which is in a lovely spot halfway up the Lake District and has far better food options than your average “sad sandwich” services. Once you’re past Glasgow and off the M8, the landscape changes almost immediately. You cross the Clyde and are suddenly in the hills, with mountains looming in the distance. It feels like civilisation has just dropped away. There’s a lovely pub stop in Balloch at Balloch House, which is one of those great old inns with dark beams and a big fireplace.

The east side of Loch Lomond is much less popular, which is largely because there’s no through road to the north west. It means a little bit of a backtrack, but if you’re putting a stop in for the night, then go east and come back round the bottom of the loch the next day. You won’t regret it. The harbour of Balmaha is gorgeous and the Oak Tree Inn is a great place for dinner. The owner also runs the cafe and coffee shop in town and they combine to give a real community atmosphere. You also get a spectacular view of the sun setting over the water, with snow-capped Ben Lomond in the distance. 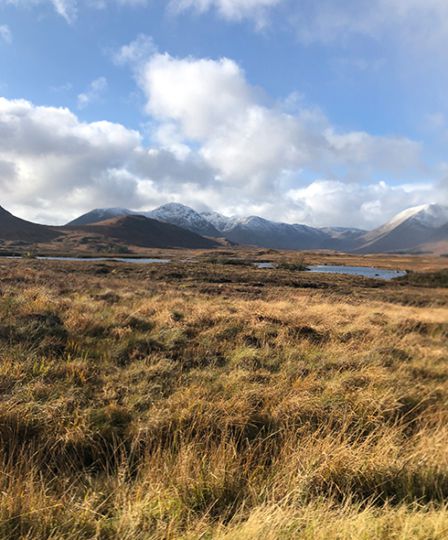 West of Loch Lomond and Glencoe

After the half-hour backtrack to come up the west side of the loch, you start to disappear into mountains that loom impossibly steeply above you and fill your view in every direction. Despite feeling like you’re in total wilderness, the roads are two lanes wide all the way, so there’s none of the slightly hairy cornering that some parts of the highlands (you’ll see later) definitely throw at you. You’ll be idling along and taking in the views without a care in the world. As you pass Glencoe, take a detour to the east and put in a stop at the Lochleven seafood cafe, on the north side of, strangely enough, Loch Leven. They serve fabulous razor clams and dishes of all sorts, with a stunning view of the water that much of their menu has been sourced from. The cafe is also a fishmonger, so you can stock up if you’re heading for a self-catering place.

Next you’ll pass through much-maligned Fort William, the gateway to the highlands. While the town isn’t as picturesque as some of the scenery you’ll pass through, it’s your last chance to stock up from a big shop if you’re heading for more rural areas. If you passed up the detour to Loch Leven and you’re feeling hungry, drop in to The Wildcat – a cafe serving great vegan, organic food in a warm little space on the high street. 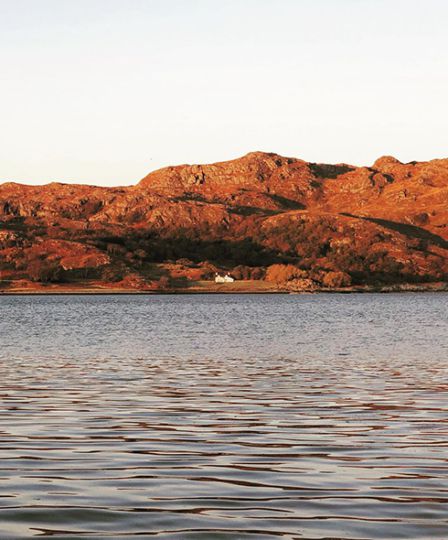 As you head out of Fort William, find a place to stop and take in the view behind you, dominated by Ben Nevis, the highest mountain in the British Isles. The road west is perfect road trip cruising again, as you pass lochs and wooded hills with almost no traffic unless you’re in a mini convoy heading for one of the Mallaig ferries. Turning south, instead of north towards Mallaig, sends you into a wonderfully undiscovered region of coast, mountains and more seafood. Right on the waterfront at Glenuig is the Ardshealach Smokehouse, an amazing inn and smokery. It’s a treasure trove of mussels, kippers, smoked salmon and more, but opens late in the off season, so check their hours.

If you’ve managed to fuel up, you can take on the Rois-Bheinn hike, not so much a trail as a determined wander. There are various routes up, none of which are marked and some of which take you through fairly wild terrain. Some sections have a Bog Factor, (a rating you should definitely take seriously) of five out of a possible five. The rewards for squelchy boots and sodden socks are an enormous landscape that you’ll have mostly to yourself, the likely sight of stags wandering the hills and an unmatched view of the west coast, even if the top is too snowy for you to summit. 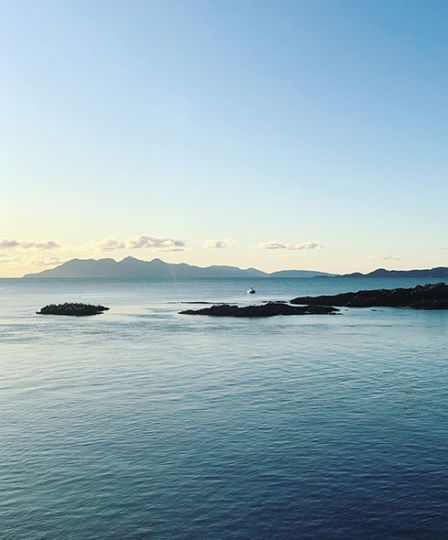 If you’re based in Glenuig, you should definitely take at least one day trip on a ferry from Mallaig. The port is just a 40-minute drive north and on the way you’ll see the Loch nan uamh viaduct, with a steam train puffing across above the water, if you’re lucky. It’s worth making time to see at least one of the silver-sanded beaches of the west coast too. Camusdarach, Morar and Arisaig often appear on “world’s best” lists and all give you great views of Rum, Eigg and southern Skye. It’s a stunning spectrum of blues in summer, while in winter the low sun softens the colours to an early evening light all day.

Despite a few of the western isles being easily reached from Mallaig, consider heading for Inverie instead. The tiny village is back on the mainland, but only accessible by boat as it sits on an untamed jut of mountainous land. There’s incredible hiking and biking, as you’d expect, but almost nobody visits as it lacks the cachet of the islands. In low season there’s only one boat out at 10am, one boat back at 3pm and one small cafe open, but there’s an incredible sense of freedom that comes with knowing you left the beaten track far behind you. 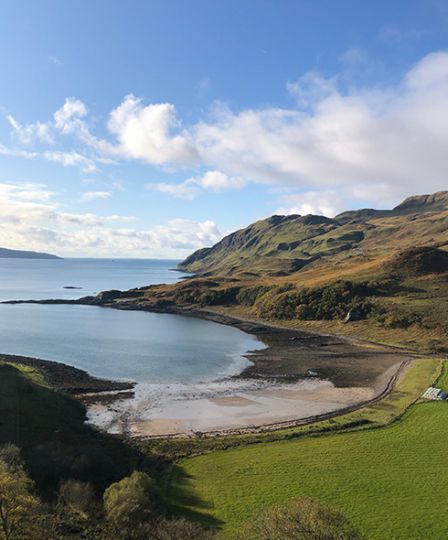 Heading south from Glenuig then west along the Ardnamurchan peninsula brings you to Sanna, one of the most westerly points on the mainland British isles. The coast is another gorgeous ragged vista of white sand but the road out is one of the wiggliest you’ll ever drive, with frequent passing places that are always in use in high season. Police signs politely ask you to let the locals overtake wherever you can. If the road starts to make you seasick on the way to Sanna Point, drop in at the Ardnamurchan distillery, about halfway from Glenuig, for a break and a dram of the “water of life”. The whisky distillery is so new that it’s not yet producing, but the tour is fascinating. You can buy a barrel if you’re the patient (and rich) type of souvenir shopper, and after giving it a few years to draw colour and flavour out of the cask, the distillery will bottle it for you. While you wait, you can come and sing to it, like the group of Danish people who visited their barrel this year. Time will tell if this has any effect on the taste.

As you start heading back south, you can wind through the hills and cross Loch Linnhe on the Corran-Ardgour ferry, or backtrack a little and take the smoother A830 through Fort William. Hugging the west coast, you’ll pass Castle Stalker View, with a cafe that’s worth a stop for its wonderful cakes and the island tower that will be a familiar sight to Monty Python fans. Oban is a good place for an overnight stop, although it feels almost overwhelmingly busy in comparison with the rest of the places you’ve passed through. Head down to the harbour if you’re hungry and look for a green hut with “local shellfish” written on it. Fishermen stroll up with crates of their catch and a local man transforms it into mussels in white wine, huge platters for £20 and bursting, beautiful crab sandwiches.

View places in the area > 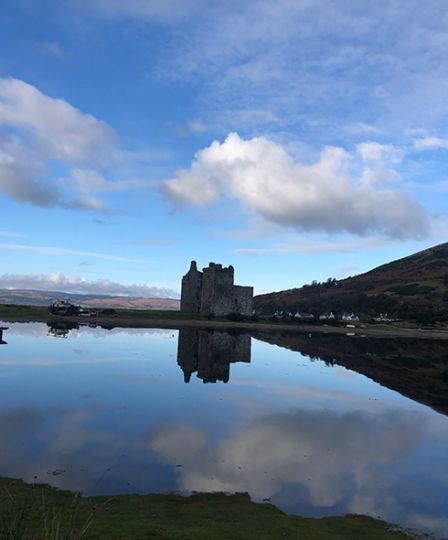 The road down to Arran is another stunning drive. You’ll get the ferry to the island from Tarbert in low season, but take the shorter hop (after a longer drive) from Campbeltown in high season. After arriving in the little port of Lochranza, head for Brodick and enjoy the views of Goatfell, an intimidating peak with clouds clinging to its summit. Despite the mountain’s appearance, the four-hour hike, that handily starts from a nearby brewery, is not supposed to be too challenging. Next to the brewery is The Wineport, a cafe where you can get a superb hot chocolate if you don’t fancy a beer, and warm up a bit before you check out the various workshops and craft shops scattered through the small town. It’s worth a walk on the beach too, as you might run into a few members of the local seal colony.

The island is small enough that you can drive over the middle to the other side in half an hour. It’s a massive climb that winches you up to almost level with the top of Goatfell, before dropping you straight down towards Blackwaterfoot. You can head over after lunch, take in the spectacular sunset, possibly even see a dolphin or two, then be back in Brodick for dinner. Despite its size, Brodick has some brilliant food options. Crofter’s, which often has live music, is in the centre of town and The Pierhead Tavern is right down on the water’s edge. The ferry from Brodick to Ardrossan puts you back on the mainland to the south of Glasgow, from which point you can begin the last rambling section of your Scottish road trip. 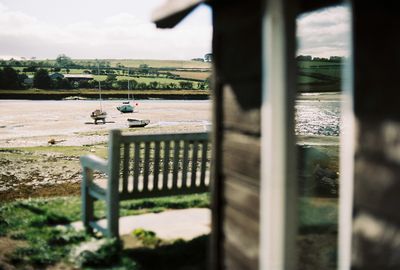 We’ve drawn on the expertise of our in-country managers, the local knowledge of our owners and trends in the wider industry, to bring you the destinations and themes that are shaping travel for 2020. 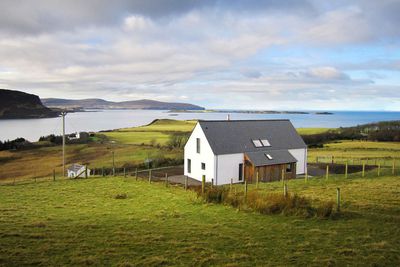 Places to stay in Scotland

Discover our special places to stay in Scotland; from grand castles, to rural bothies, contemporary self-catering cabins and stone cottages. 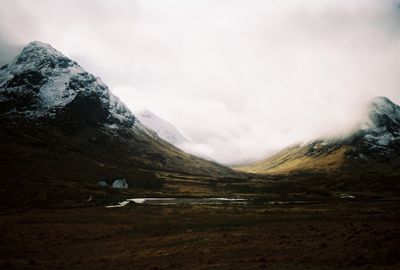 Slow Guide to the West Highlands

Our Slow Guide to the West Highlands will help you get off the beaten track, explore further and uncover the people, places and experiences that make somewhere unique.