Everything about creating this guide felt a little different. For previous editions, we’ve travelled to Yorkshire and Northumberland, so far from our Bristol base that everything felt like a discovery. When it came to planning our trip to Devon, which most of us are incredibly familiar with, we wondered if that sense of new was possible. We found out that even the most familiar places can surprise you.

We reached tiny Lynmouth, in the north-west corner of Exmoor, via hairpin bends that lowered us down thickly-forested slopes so steep that a water-powered funicular was built to connect the village to the clifftop town of Lynton. With no sandy beach to draw the summer crowds, the cove is one of those secret places that Devon does so well, quietly beautiful at any time of year.

There are great hikes from the village, either out along the coast and back inland or vice versa. We took one of the shorter, steeper routes up the valley and back along the cliffs to see the views of the bay. As we set out, we paused on the old stone bridge to appreciate the contrasting views of the wooded valley one way and the sea the other, before heading inland on a riverside trail.  The sound of the surf gave way to the murmur of the river and soon we were deep in the woods. We hiked a short, hard loop and stopped at a hilltop pub for a break in blustery sunshine with a view of the countryside stretching away below the garden. The return along the cliffs gave us distant views of the south Wales coast and we watched surfers catching low waves in the narrow bay. Although it was tough tearing ourselves away from Lynmouth, we moved on west towards Saunton Sands, but were so eager to see the ever-popular beach that we jumped out at the first sight of a sand dune and found ourselves in the eerie landscape of Braunton Burrows.

Most people bypass The Burrows, eight miles of quiet, sandy expanse behind the beach at Saunton, and head straight to the sea. Although it was accidental, the more patient approach was an atmospheric addition to our day. The dunes seem to cut you off from the world and wrap you in a strange silence that’s broken only by the occasional tank. Braunton and the beach were used by the Americans to train for D-Day and are still leased by the MoD. While closed occasionally for live fire exercises, they are mostly safe to walk and, as we discovered when several came crashing by, you hear the tanks before you see them. Being made to work for our arrival at Saunton Sands gave the sight of the huge sweep of beach a satisfaction to match its beauty. Saunton is a hugely popular spot for families, dog walkers and longboarders, but its sheer expanse stops it from feeling too crowded. The cafe at the north end runs surfing lessons and also rents out boards if you fancy taking on the waves. The rest of the beach, thanks to the extent of the burrows behind it, is undeveloped coastline reaching off into a misty middle distance. It’s a captivating sight from the beach and a stunning one from the lofty viewpoint of The Chalet Saunton in the nearby cliffs.

SEE ALL OUR PLACES NEAR EXMOOR

Approaching Dartmoor from the north brings you along its most deserted edge. As soon as you enter the park the whole landscape is otherworldly, with wild ponies grazing the moor, tors topped with rock stacks and hardly any sign of human habitation. As we headed to Bellever Forest to talk sustainable tourism with the Forest Commission’s Tim Powles, we experienced one of Dartmoor’s magical transformations. From sparse moorland, a line of huge trees rose up in front of us and we entered a Tolkien-esque landscape where watery light lit up patches of the mossy floor in truly ancient forest. We walked down through the woods to the riverside with Tim and he talked about how the varied terrain was key to Dartmoor’s unending attraction. “It’s a place of contrasts because one minute you can be standing in the sunshine at an iconic place like Postbridge and then half an hour later be on open moor with not a soul in sight and just your thoughts, the birds and maybe some sheep for company.”

As well as being beautiful, Dartmoor is an important area ecologically, historically and culturally, with the balance carefully maintained by organisations like the Forestry Commission. It’s one of the rare spots in England that allow “backpack camping”, where you can take whatever you can carry deep into the park and pitch alone in the wilderness. It’s a great way to explore the area with minimal impact, although Tim often finds himself debating the definition of “backpack” with people staying in suspiciously well-equipped 8-man tents. He explained how much history you were walking through if you knew where to look and recommended the free guided walks from the Dartmoor Pony Heritage Trust. “The image of the past is imprinted on the landscape today” he said, referring to a wealth of archeological sites reaching back to the Bronze age, and the effects of agricultural and industrial exploitation that have shaped the land in ways still visible 60 years after its designation as a National Park. As Tim told us, “you feel you are a part of the past by just being here. That’s what draws people back to the same places and drives them to explore new ones.” We left Dartmoor with a renewed conviction that it was a genuine rival to Devon’s coastline, and reminded ourselves that you could travel from the sea to this majestic wilderness in only half an hour.

SEE ALL OUR PLACES NEAR DARTMOOR

“you feel you are a part of the past by just being here. That’s what draws people back to the same places and drives them to explore new ones.”

14th-century Dartington Hall, just outside Totnes, looks much like many other historic buildings you’ll find across Devon, but within its plain stone walls and manicured grounds, an incredible experiment is flourishing. In 1200 acres, the Dartington Trust has reinvigorated and modernised the work of the Elmhirsts, progressive activists who bought the estate in the 20s and began a grand suite of projects designed to find a better way of living. It now hosts a diverse community of passionate artists, craftspeople, social campaigners and horticulturists.There’s a barn cinema and a gin school right alongside people pushing the “lunatic fringe” of agriculture. When we spoke to Lou Rainbow, the Craft Learning Programme Manager, she confirmed what we suspected – there‘s too much to see in a single, short visit. “Depending on who you get shown round by, you’ll see something totally different because their passions will lead you. You’ll never know the full extent of the place.” She is undoubtedly right, but even knowing a fraction of it is truly inspiring.

SEE ALL OUR PLACES NEAR DARTINGTON

“Depending on who you get shown round by, you’ll see something totally different because their passions will lead you. You’ll never know the full extent of the place.”

Salcombe’s bright houses are clustered on a hillside in a crook of the Kingsbridge Estuary, which winds through the patchwork of fields and meadows of the South Devon Area of Outstanding Natural Beauty. It’s a classic seaside town – sails and red buoys bobbing in the harbour, a few tourist shops, the faint background chug of fishing boat engines. Famed for its beauty, it gets overrun in summer, but take the ferry over to Prawle to find a quieter stretch of the coastal path. Even on a grey and drizzly day, the crossing gives stunning views of colourful Salcombe and the dramatic walk to Portlemouth follows hedge-lined paths before emerging at the top with the seascape suddenly below. The path led us past an old church tower that echoed with the calls of birds and it was easy to see beyond the weather and imagine the joy of a sunny day spent hopping between coves in the sunshine.

After lunch and a pause to dry off in the warming surrounds of the Mill Brook Inn, we headed for Totnes. The small town’s warm, fun feel was a revelation. Blissfully unaware that Friday was market day, we followed the general drift of people up the hill and under the arch of the famous East Gate clock to the square. The market was a bustle of food and craft stalls, with producers and artisans from within the town and the surrounding countryside all coming together. With its energy and openness, it’s no surprise that Totnes was the starting point of The Transition Network, now a global movement that inspires communities to work and live with more environmental and social awareness. There are numerous small bakeries and cafes, waste-free shops, masses of organic produce and a friendly buzz to the ancient streets. It’s the sort of place that gives you hope for the many market towns looking for innovative ways to retain their character and culture.

SEE ALL OUR PLACES NEAR SALCOMBE AND TOTNES

As is often the case when you’re out on the road, we heard about more places and possibilities than we had time to experience. The sweeping shelf of the Valley of Rocks and the waterfall where the East Lyn and Hoar Oak Water meet both just outside Lynmouth had been recommended to us for their natural beauty. Many also urged us to visit tiny Topsham, on the banks of the Exe, for its antique shops and independent businesses. From there, a newly-constructed section of the coastal path, known as the Exe Estuary Trail, links villages all along the water and runs through the wildlife haven of Dawlish Warren. We also had to pass up the chance to dine at the River Exe Cafe, a floating restaurant out in the middle of the estuary, accessible only by boat and in the warmer seasons. Reservations are essential and include transport over to the scenic eatery where seafood is of course a specialty.

SEE ALL OUR PLACES IN DEVON

Choose from holiday cottages in various Areas of Outstanding Natural Beauty, bed and breakfasts on the beach, quirky hotels in local villages, and inns with delicious and hearty pub grub. 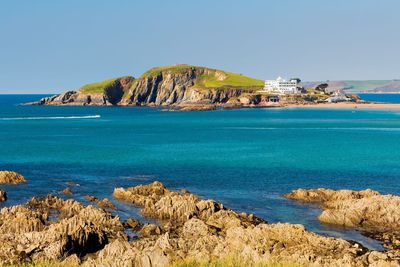 Places to stay in Devon

Scramble down to beaches in craggy coves, surf broad bays, layer jam and cream onto warm scones or hike the brooding miles of Dartmoor. 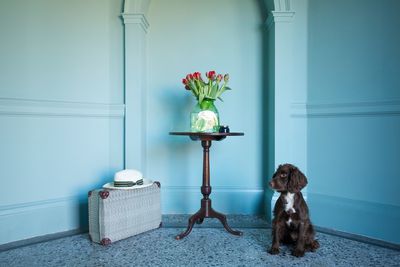 Self-catering places, hotels, B&Bs and inns in Devon that will welcome you along with your dog. Some places will offer treats on arrival, others will offer dog hampers, blankets, beds and walking guides.